Prodigies and exceptionally gifted people have NO idea how difficult things are for mere mortals.

Sam Snead, the greatest natural golfer I ever saw, was once asked how he made the ball fade (move left to right). He said it was simple, just think right. Of course, to execute a draw, one merely thinks left. Sure, Sam.

Ted Williams at one point tried to coach baseball. He couldn’t understand why a batter couldn’t see the seams as the ball left the pitcher’s hand, calculate the rotation and swing accordingly. Hell, most of us can’t even see the ball. Ted finally became frustrated and gave up.

Larry Bird tried to coach basketball and didn’t seem to comprehend that he could drop in the ball from 30 feet easier than you and I can hit an elephant in the ass with a 2×4.

What does this have to do with magic, you say? Well I recently had a chance to review Richard Turner’s Fans, Flourishes, and False Shuffles. It was OK, I guess, but over and over I felt the descriptions were woefully inadequate. For instance, the pressure fan description was basically, put the cards in the left and spread them from 4 o’clock to 8 o’clock. No finger positioning, no tips – no nothing. 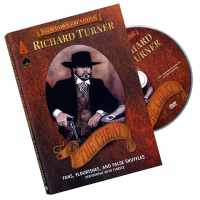 It’s always enjoyable to watch a person as talented as Richard Turner perform – he makes some very difficult things look trivially easy, but I can’t recall a single tip to help the learning process. There’s always merit in watching a move done well and it is an aid in the learning process, but it is not teaching.

Compared to Richard Kaufman’s sleep walking exhibition on his teaching DVDs, Turner is a ball of fire — but, then again, who isn’t.

The DVD is priced at the lower end and if you enjoy watching him work, please feel free, but don’t expect to learn much.

This month’s honored guest at the Cafe’ was Al Schneider. I’ve watched Al for 35 years in various venues and, let’s be honest, he invented Matrix. That’s it.

Sure, he writes esoteric crap and looks like he’s got terminal hemorrhoids, but most of it is just a tired rehash. In his Cafe’ appearance, he said he didn’t know who Ross Bertram was. I’m sorry, but that’s ridiculous. He did refer to him as the guy with the hair, when someone reminded him of the Stars of Magic.

Al seems harmless enough, although I personally, could do without his conclusion that he was better than other magicians because he drove a Jaguar. Obviously, his superior intellect was being rewarded by some sort of cosmic feng shui.

Anyway, at some point, Al mentions the derivation of a move and one of the Cafe’s greats and our award winner, Paul Chosse, steps in with:

I’m surprised to read your recollections of Larry and the Detroit crew above. I’ve spent hours with Milt Kort and Bob Stencil, and took tons of notes. They remembered things quite differently from what I’m reading here. If you’d like me to post some of those recollections keep revising history. We’ll put up both stories and let the cards fall where they may…

What’s the purpose here Paul? Is this just to embarrass Al or are you just a congenital bastard, totally incapable of keep you mouth shut?

I’ve been around magic a long time and, frankly, I never heard of Chosse. Apparently, he’s some sort of minor god that we should all listen to in hushed reverence. My first serious notice of him occurred during the St. Youell extravaganza. It’s interesting to me, that his holiness blamed some of his problems on people promising material and not delivering. I’m guessing our boy was one of them. It’s too bad we couldn’t have more of those exciting interviews. It was like reading toast.

I don’t know or care what kind of deal Chosse has with Brooks regarding his blog, but it’s been nearly 4 months since he posted. He certainly has plenty of time on his hands, based on the large number of posts.

Like the IBM Gold Cups we don’t award the i/m Disposable Douche very often. A person

must exhibit exceptionally uncommon boorishness and a total lack of civility. This months recipient is highly deserving of the honor.

1 thought on “Learning Magic From Sam Snead and Ted Williams”