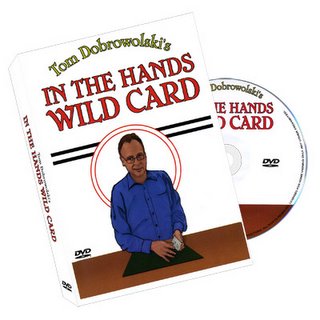 I’m supposed to be a cranky old goat pissing on anything new that comes along, but I’ve recently reviewed and studied 2 new DVD releases that I think are terrific. Additionally, the one trick – one dvd ratio seems to always be a screwing waiting to happen, but I’m highly recommending these:

The first is Tom Dobrowolski’s In The Hand Wild Card.

I have long maintained the the best card effects are created by skillful sleight of hand, combined with judiciously used gaffs. Tom’s routine is a perfect example of that. It’s an ideal trick for walk around and table work. Combine this with John Bannon’s Twisted Sisters and you’ve got a couple of tricks that will carry you a long, long way.

Tom’s routine is the result of years of performance and refinement. There is a logical reason for everything, even bringing out the special set of cards. The spectator is never challenged, made to feel stupid or held out for ridicule. The only danger I see is some douchebag has every opportunity to drag out the no, the clean one line. You have my permission to shoot on sight.

Additionally, Tom is a heck of a nice guy. I like to see the good guys succeed.

The other one is Masterminds Volume One – Criss Angel 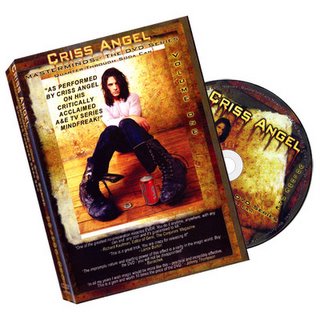 this. It’s pretty easy for a guy like me to write off Criss as nothing but hair, tattoos and nipple rings, but this is good. Damn good!

I’m sure by now anyone reading this knows this is the long awaited explanation for Wayne Houchin’s Quarter In Soda Can routine. Off hand, I can’t think of a better impromptu trick. Wayne’s explanation is complete and concise. It will take some work, but it’s not a killer. No real finger flinging, just timing and naturalness. If you haven’t seen it, watch the performance first. I’ll bet it fools you.

Criss comes off as somebody that really cares and thinks about his magic and is a nice guy. I’ll never like his performance style, but his magic isn’t aimed at me – as they say, I’m not in the target demographic. Criss has received some criticism for making this publicly available, but I can’t imagine many layman laying out 30 bucks for the secret. Hopefully, it doesn’t get prostituted too badly on the net. Good job, fellers.

Our last D&D on magicians’ willingness to be hosed over and over by our purveyors things magical brought a couple of public comments and several private.

Our friend Scot weighed in with:

You really hit the nail on the head with this one. But until we stop buying this crap that’s out there, it will never stop.

I agree Scott, but identifying the bad guys gets pretty tough. This is compounded by many of out compatriots benign acceptance and constant public apologists. Until we accept that a failure to do what is promised and advertised is just plain wrong, we all better buy a large tube of K/Y. We’re going to need it.

An anonymous poster chimes in with:

I have always been shocked by the total lack of standards exhibited by professionals in magic when it comes to undertakings such as trade magazines and newsletters. Stan Allen at Magic, I think, raised the bar by producing a timely, quality product, a standard unheard of in the magic world before the inauguration of his magazine. The “Always late but always great” Genii, for example, was a travesty until Richard Kaufman took the reins and placed it an a more professional footing. Most newsletters have taken subscribers’ money and never fully delivered. I believe that once a person takes money for a performance there is a contract to deliver. All the subscribers get is whiny excuses like the dog at this issue. Where are the final issues of Ted Lesley’s, Dan Harlan’s, Bob LaRue’s newsletters? Again, although very late, Richard Kaufman at least managed to produce all four issues of Looking Glass. The standards (and I use that term loosely) experienced in magic circles are appalling. I am sure the producers of these perennially late and incomplete publications would be first to decry a professional performer who hid not show up to a performance on time; but their own practices in failing to deliver promised issues is the equivalent on not only failing to show up on time, but also failing to show up at all AND taking payment for the performance never delivered.

Spare me from the sob-sister apologists who tell us that we should be grateful that we get even the aborted subscriptions. I am not so ravenous for “secrets” that I would find this behavior acceptable. I say that if someone undertakes to do something and takes payment for it, he better follow through. If he can’t, he had no damn business taking a subscriber’s money in the first place.