I saw this DVD advertised recently and bought it on a whim: 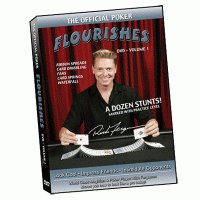 The DVD doesn’t cover a lot of flourishes:

but it does a better job than anything else on the market. Moves like the hand to hand spring, dribble and pressure fan can actually be learned from this DVD. Interestingly, this isn’t aimed at magicians, but poker players. It sells for 30 bucks or so and your local dealer should have it.

Fuck me – I’m a magician

I’ll never understand why magicians are so prone to apologize for the lame, even criminally bad, treatment they get from various purveyors of magic apparatus, books and all other forms of selling secrets. Going back to my favorite Holy Man, Stephen F. Youell, to Cafe insider Tom Cutts and his AM/PM magazine, to Jon Racherbaumer and his unrefunded Hierophant, to the ongoing furor around the recent Martin Nash book, to……. You name it and magicians have had one shyster after another ram a dry one up their ass, yet they continue to apologize and even defend this shoddy treatment.

This isn’t a matter of turning the other cheek. That’s a noble thing to do. It’s just an unfathomable willingness to to accept liars and cheats into the fraternity and make no mistake – that is what most of them are.

Anyway, what brought this to mind was a recent post on the Cafe. You don’t have to read this blog for long to realize that I think Harry Lorayne is a world class ass – an egotistical, industrial grade tool writing way beyond the time when he had something to say. Anyway, his last last book was a rewrite of some of his earlier works. Actually, not a bad idea as the writing was somewhat lame and they could use an update. According to his advertising, the book was only available from him. OK, it’s his book and he can sell it anyway he wants. This means it will not be available from discounters and if you want it – pay the full price.

After Harry milked it for all he could, he gave it to a distributor and now you can get it EVERYWHERE and for considerably less than Harry was charging. Some guy wrote on the Cafe that he was disappointed that Lorayne had backed off his original release and wondered if anyone else felt the same way. No one, not a single person, took the time to agree. Two doo rags did write to say they enjoyed the screwing. It’s incredible.

Till next time—–
i/m