To those that have been married for more than a few weeks, I assume that you have been drug to something called a house walk or home show. This is where you pay money to go look at houses and stuff you can’t afford. I’ve never understood that. “Gee, honey, look at that $50,000 gold shower. That would certainly look great in our master bathroom.” Yeah, it probably would, but the chance of it ever being there is nil.

Call me jealous or envious and I guess you’re probably right, but why should I pay good money to look at shit only CEOs and other thieves can afford? Again, I’m in the minority as these events continue to draw a lot of people.

Scott Wells, a good dude from all indications, is doing his current podcast from Fechters annual bash. You can find it here. I’m not a podcast person, but I understand he does a very credible job and if you are interested, this is probably the place to go. For me, all I see is: 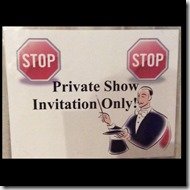 The convention always sounds like fun for the in crowd. I would blame the USPS for my failure to receive an invite, but I have been through at least a dozen postal carriers and I’m beginning to think it’s not their fault.

Obie, maybe it’s time you get some new clipart and create a sign that’s a little more modern. This is frighteningly dated, but maybe there’s something cool here that I don’t understand.

This is your old buddy i/m signing off from parts unknown rather than New York. Get use to it.