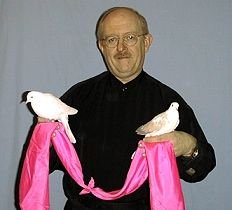 Back in 2003 magic blogging took a turn. The direction was and is subject to debate. If you are Richard Kaufman you think it turned to childish immaturity. Some people felt that the language used in the blog was unnecessary and inappropriate for public consumption. Many, however, in the magic community found it creative and just plain fun. Of course, I’m referring to the Magic Circle Jerk. It’s arrival spawned many pretenders, most of which have vanished ito the ether.

The Jerk was written by someone named Andy, who tells us he is from New York, but has left very few clues as to his actual identity. As with most New Yorkers, he’s a big fan of what he sees in the mirror. That’s OK. It goes with the territory.

From his wording and syntax, he is obviously intelligent and well educated. Certainly not as intelligent as Mr. Mensa himself, His Holiness, Stephen Youell, but nevertheless very bright.

Jerk Mania reached its height after the publication of a boring post challenge issued to users Of the Magic Café. There is no reason for me to recount that, as it is readily available should you care to find it. Andy, was always at his best in attack mode. That is certainly not unexpected, as any of us that blog we seem to be at our best when the anger juices are gushing.

In 2005, unceremoniously, Andy called it quits. I suspicion that he realized it had run its course and had developed an unsatisfactory sameness.

Recently, he pulled a Phoenix and the jerk is back in business. http://www.thejerx.com/ The header on the blog is a rather clever take off on Annemann’s Jinx.

The new blog is still certainly the Jerk, but we can now see very intelligent insights into modern magic and presentation. Actually, some of the best stuff I have seen written recently. He has a surprisingly well contained cynicism about the way magic is performed and how it should be performed for maximum effect.

In some respects Kaufman is still right. Conversely, if you write him off as childish crapola, you’re really hurting your understanding of good magic.

Welcome back Andy! (Turn on comments on your blog –  it could be fun)