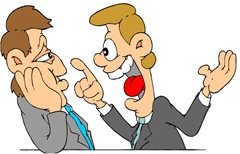 I don’t attend many magic lectures any more. Although I came to the conclusion long ago that most professional magicians are pompous, overbearing and over-rated gas bags, I used to be willing to attend 20 or 30 lectures a year hoping to find a few gems. I had the opportunity to see David Williamson, Paul Harris, David Roth, Michael Ammar, Duke Stern and a few others that made the hunt worthwhile – at least I used to think so. As I’ve gotten older and gas has gotten more expensive, I’m going to fewer and fewer. You have to open a lot more oysters to find a pearl it seems.

I recently attended John Lovick’s lecture and was sorely disappointed, as were many others that I spoke to. Here was a lecture that had been advertised for months and Lovick acted liked he just heard about it that afternoon. It was disorganized, uninformative and, in general, just not very good. From my perspective, he wasn’t very gracious to the attendees either. I will admit that I enjoyed getting a glimpse of his Handsome Jack persona, but it certainly wasn’t worth the cost or time invested in attending the lecture.

So….. when I was invited to attend a lecture by David Regal, my initial impulse was no way, but I remembered how much I had enjoyed his DVDs and he certainly seemed like a nice guy and the magic was clever and doable. I decided

to go and boy am I glad I did! Regal is a nice guy and his lecture was fun and informative. He was well prepared even though it was the first time he had done this particular lecture.

In all fairness, this is probably more of a book tour than a lecture. Regal has produced a huge and expensive book called Approaching Magic. It is pregnant with every type of material imaginable and it was a real pleasure seeing some of the things performed that I had recently read. As expected, some looked better and a couple actual looked worse than I envisioned. He sold a bunch of books!

Two things struck me as I thought about the lecture. David Regal structures his magic to fool his audience. Even though he does some story stuff, he’s a magician and the trick comes first. Thanks for remembering that!

The other thing I’ve been formulating in my mind all day and I’m still not sure I can state it as succinctly as I would like. Entertaining magicians like Regal don’t spend their time talking about entertainment – they truly teach by example. It seems that only the dullards keep beating their audience constantly with the entertainment stick.

See him if you get a chance – it’s worth the effort I assure you.

Final Drivel – Regal did a lot of stuff with magnets – well hidden stuff. It may be time to drag out the old pendulum principal and combine that with these modern magnets.  It could be a powerful combination. I kind of wish I hadn’t sold my Upside Down Topit books now.