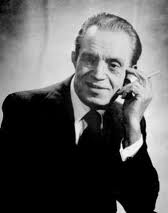 I’ve told this story before, but it bears repeating. 100 years ago, or so, I had the opportunity to visit the Magic Castle and watch Slydini perform. It was like seeing the Stars of Magic jump off of the page. He performed his coins through tables, his paper balls to box and coins across if I recall correctly. I was absolutely blown away.

I attended the performance with a college friend that had only recently taken up magic. As with many beginners, he hit it very hard and was thrilled to learn each new secret and was rapidly developing an adequate performing style. Not unexpectedly, he had never heard of Slydini. The next day we were discussing our time at the Magic Castle. I asked him what he thought of Slydini. After I described who he was, he immediately said "Oh, the guy that kept throwing things in his lap"? Please understand, he wasn't being mean or disrespectful. He just wasn't fooled at all. I was devastated. Someone had dumped on a magic hero.

Over the years, I've thought of that incident many times. What does our audience actually see? Certainly, Slydini's performance was a technical success, at least from a magician's standpoint. His Han Ping Chen was a thing of beauty. The moves to his lap were well covered with his famous brand of misdirection. Nonetheless, my friend wasn't fooled. He wasn't even entertained.

I'm sure my friend wasn't the only one in the audience less than impressed with Slydini's performance. It was a polite and appreciative audience and he got the response that a legend of his stature deserved.

I guess that is one reason why I wince so strongly at statements like "it just blows right past the layman". No it doesn't! Your audience may not call you on it or embarrass you while you are performing, but so many times I'm fully convinced that few people are actually fooled and the magician is merely tolerated.