I generally enjoy books more than DVDs – probably a function of age as much as anything else. 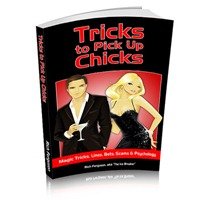 There are exceptions. I understand magic is dominated, today, by pubescent boys that use magic as a means of social interaction. That’s not the guy on the front of Tricks to Pick Up Chicks. Obviously, blondie is ready to take him right there, due to the clever use of a thumb tip!

The DVD by the same name (there’s probably a review on the site), at least, was decorated by several astonishingly beautiful women. I’m not sure why this was even produced, except we seem to be reissuing EVERYTHING that was ever written or filmed.

I see Murphy was it classified under Comedy. I don’t find it funny.

At least it’s inexpensive, you’ll have plenty of money leftover to buy a few bottles of those pills that make your wang grow down to your knees. Every teenagers dream come true.