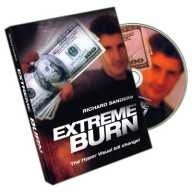 Without a doubt, Patrick Page’s Easy Money is one of the most reinvented and revised tricks in magic. In all fairness, it was a, somewhat, obscure trick until it was repopularized by Greg Wilson as Hundy 500. Since then we’ve had a number of variations offered. One of the most popular was Heiny 500 by Karl Hein – a beautiful trick, but the DVD was a joke. The production of the gimmick was VERY poorly explained and Karl Hein proved himself to be less than standup about the whole situation. Unless these guys are selling the secret to immortality I don’t plan to buy anything from them ever again.

Richard Sanders’ effort with Jay Sankey called, I believe, a couple of guys screwing around in front of a video camera and selling their shit for an absurd price, received a less than favorable review here. He’s gone a long way towards redeeming himself with Extreme Burn. Here’s the official blurb:

Count out five bills, one at a time. Show them front and back and lay them flat on your hand.
With NO folding, NO cover, NO nothing…THE BILLS VISIBLY CHANGE!
That’s it. You are now holding five completely differnet bills.
Count them out. Show them on both sides. They are real bills.
If Harry Potter could do a bill change, this is what it would look like!

Extreme Burn is not just a variation, it is an evolutionary leap forward in technique and effect.

Besides misspelling different (come on fellers – spring for a spell checker and use it!),  this is a reasonably accurate description and if you want to do a bill change, this is as good, if not better, than any.

After the terrible, half-assed explanations on the Heiny DVD, Sanders careful and precise descriptions are a delight. This is a trick I’ll be using and I recommend that you consider adding it to your everyday repertoire.

I’m not going to do a full review, as there are 515 messages – yep 515 – on the Cafe about this. If you’re having trouble getting to sleep, a few pages of that should send you straight to happy land.