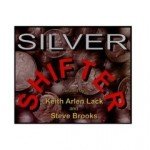 A year or two ago, I bought Silver Shifter – Steve Brooks’ $50 rubber coin. I swear that’s what it is. It also came with some silver colored powder and a Q-Tip, I think.

If I rubbed the silver powder on the coin and I stood at one goal line of a football field and you stood at the other goal line it looks a little like a half dollar. Now I can perform miracles as long as you don’t move any closer.

I bought this well before I understood Steve Brooks. Those of us that have bought magic over the years have opened many packages and felt seriously screwed, but NOTHING ever compared to opening the Silver Shifter package and realizing you had just paid 50 bucks for a fucking rubber coin. FIFTY BUCKS! Supposedly, they had high manufacturing costs.

Brooks promised aftermarket books and even a special section on the Cafe for purchasers. I understand it will now be a section of Cogitations II. If the man had an ounce of compassion he would have, at least, included a bottle of Vaseline with every purchase. I’m still sore.

The next release from the fertile mind that is Steve Brooks was something called Free Fall. Someone gave me this over a year ago and I never bothered to break the seal. After all the initial hoopla and congratulatory posts you would think we could see it on every street corner. Hell, I thought they may even make a TV series from it. To date, I’ve never seen anyone do it or mention it.

MagicChris, took his lips off Brooks’ ass long enough to pen this:

That’s right! Anyone that uses Free Fall or Silver Shifter knows how his creative mind works!

Yes, Chris, I believe we do!

Having conquered the creative end of magic, Mein Brooks turns his considerable self to the craft of DVD production. He’s a talented S.O.B. His latest effort is The Rat Pack by Curtis Kam. Peter Studebaker reviewed it in the September Magic. I won’t fully recount the article. The final paragraph is sufficient:

If you build a better card trick the world will beat a path to your door. This ain’t it.

Maybe, just maybe, I’ve figured out the problem. Peter’s review says the performance was shot in a pool hall/restaurant. Talk about the fox in the hen house. How was Mein Brooks supposed to concentrate when he was working surrounded by french fries and hamburgers? The DVD never had a prayer. Never!

I’m told Curtis is a nice guy and a good performer. Too bad he teamed with this clown for a very visible project. I doubt the Cafe publicity offset the harm from the amateur production.

1 thought on “Fool Me Once”