I must have seen over 200 magic DVDs. I have a couple of dozen. Certainly, 3 of the last ones I would get rid of would be David Williamsons' series:
I don't know who the best close-up / parlor magician in the world is, but Dave has to be in the team picture. He probably does more world class routines that any magician I've ever seen. His cups and balls routine, using 2 cups like Tommy Wonder, is my favorite and, interestingly, doable by most reasonably coordinated mortals. It's hard to believe that a simple interlude of the pencil through quarter could be so magical. The clever routining of the thumbtip and salt is sheer genius. I would guess that Dave's goofball personna may hide his brilliance from many magicians. That's too bad. Unfortunately, he's probably best known for the striking vanish, which frequently looks like what is – throwing an object from one hand to the other. If you do the move, gram Magic Farm and follow his advice there. He's backed away from many uses, himself. To the point, at last. I guess the most frequent word I heard him say was motivation. At no point in any of his great routines are there any overt moves which are logically unnecessary. For instance, when doing the cups and balls, no matter how good your pass, if there is no reason for moving the ball from one hand to the other, then something is lost. It may be on a subliminal level, but the spectator instinctively feels an incongruity that shouldn't be there. Dave uses the classic wand for motivation some of the time. He has to transfer the ball to grab the wand. Simple and effective. If you haven't seen Dave's routine – do so as soon as possible. If you have the DVD – watch it again. Listen to his advice on timing – talking about the offbeat or on a laugh. He really tips it all. Learn from it.
Drivel & Drool
[This section is intensely personal and contains things of interest to me. There is no theme or agenda. There will be times I talk about the Cafe. I may give a computer tip. I may virtually visit other blogs. Please be warned that this area may be a little coarse and the blogs we visit, less than elegant.]
I know talking about politics is dangerous – damn dangerous, but I'm so frustrated with those goofballs running the White House I could scream. I'm a lifelong Republican and even voted for him and, frankly, I doubt John Kerry would be much better. What a choice we had in 2004! I resent the constant barrage of crapola that by disagreeing with The War President we are not supporting our troops. To those of us that lived through the Vietnam War this is right out of he playbook of Lyndon Baines Johnson – My Country Right or Wrong or my favorite – America! Love It Or Leave It. Get this you dumb ass – the war in Iraq was a bad idea on 9/12 and it's still a bad idea. You are bankrupting the country so you can play mine is bigger than yours with your lying old man. There were many of us that questioned a lack of exit strategy, the validity of the immediate threat from Sadam Hussein or the fight them over there so we don't have to fight them here rhetoric. This is not hindsight. This has been brought to mind recently by our inability to respond to numerous crises because our resources, our energy and our administration is consumed by Iraq. Everything is met something like this: Problem: All of our jobs are being shipped overseas. Answer: The White House runs out some dufus telling us it's good for the economy. George says: How about that war. Support our troops. Problem: Gas is $3.00 a gallon a climbing Answer: The White House runs out some dufus telling us nothing we can do – you're screwed. Just market forces. George says: How about that war. Support our troops. Problem: Most of us won't be able to heat our homes this winter Answer: The White House runs out some dufus telling us nothing we can do – you're screwed. Just market forces. George says: How about that war. Support our troops. You get the idea. Don't for one minute think that a real President would be powerless. He speaks, or more correctly could speak, from a powerful pulpit. Right now we have shameful profiteering taking advantage of our pro-business administration. At some point this has come to mean big business. If you are in any industry affected by an agency like the FTC, FCC or …. it's apparent they are owned by the corporate interests. Between big corporate interests and trillion dollar hedge funds we are being sold into oblivion.
Meanwhile GII fiddles away. I worry for my kids. 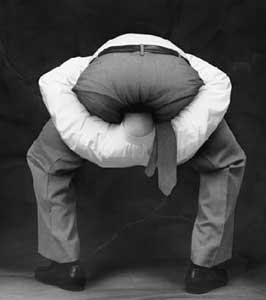 Hey Rummy, I found the WMDs!